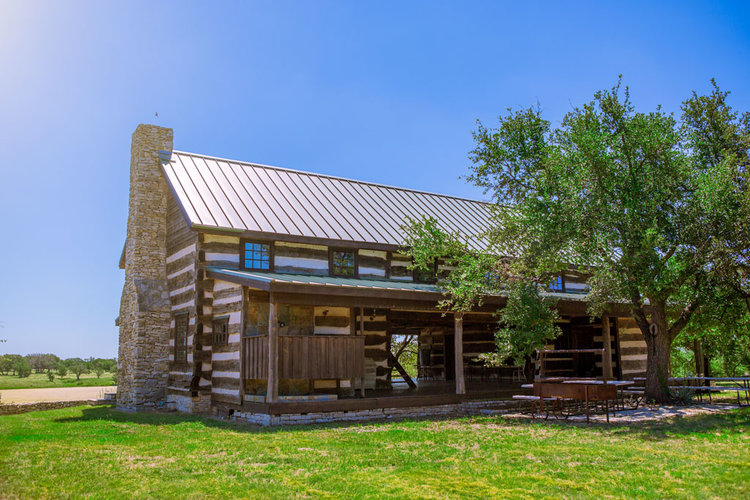 The “Dog Trot” was built in 1835 in Ohio. The style is a typical Dog Trot style which has two “pens”, one for living and the other for cooking and eating, with a breezeway between the two pens. Each pen was probably built separately as the homesteading family grew, and the upstairs portion was added for an expanding family. The breezeway was for people to sleep during the summer, a great place for family conversation, and the dogs to mingle all year round….hence the name “Dog Trot”. The cabin was moved from Ohio to the 10xXx Ranch in 2002 and rebuilt on Penny Lake. The Mitchell’s added the Texanna type porches on the east and west sides, and windows for viewing. While there are only two sleeping areas, they are huge. Each bedroom can sleep up to eight people. There are four bathrooms in the cabin. The cabin is heated and cooled by a Geothermal system which uses Dime Lake as the heat exchanger to run the heating and air conditioning. The cabin is located on Penny Lake in the very back and isolated part of the 10xXx Ranch. Kids enjoy “camping out” in the stone fence enclosed yard. The night sky views and sounds of the lake and wildlife are very impressive. 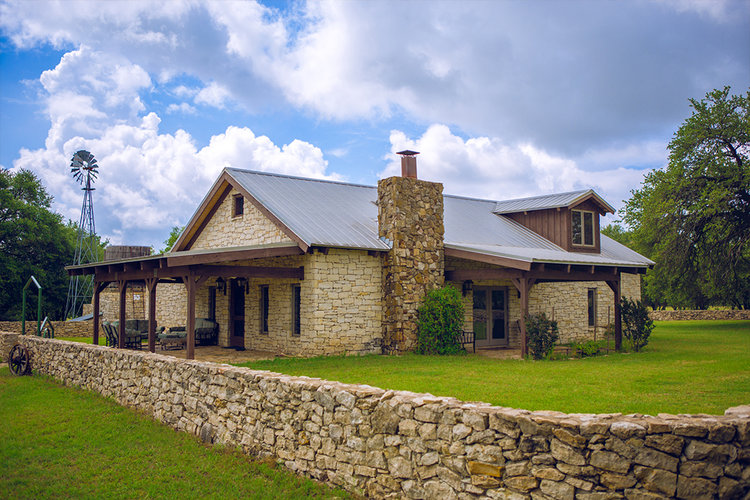 The Hill Creek House is a Texas style rock faced home built originally in the late 1950’s. The beautifully remodeled house is a rustic ranch lodge for hunters and fishermen. The Hill Creek house has three bedrooms and five bathrooms and is surrounded by an old stone fence with huge live oaks in and around the yard. The yard is a perfect area for kids to “rough it” by pitching tents and sleeping out. There is also an old windmill and stone pump house next to the Hill Creek house which completes the ranch house look and feel. The Hill Creek house is in close proximity to the 1850 English barn and the constantly running Hill Creek. The Hill Creek house is located on the Elk side of the 10xXx, and it is quite amazing to see and hear the Elk stroll by and bugle during the rut. 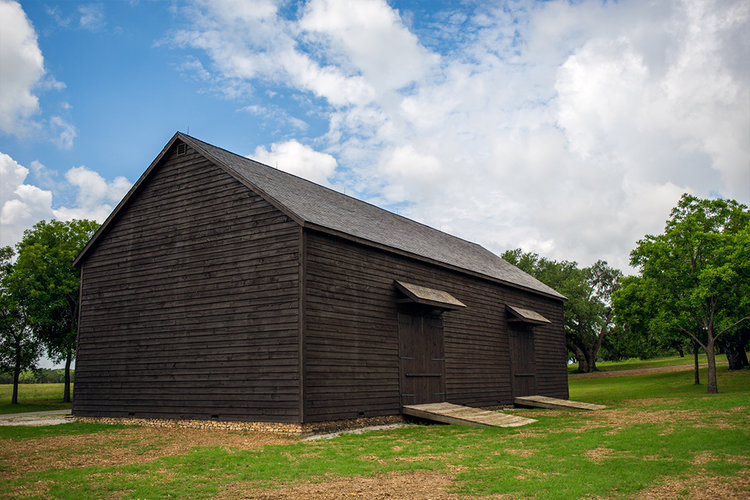 Built originally about 1850 in the historic Mohawk Valley of New York state, the “Reese Brothers Barn” is an unusual example of the transformation that took place in American agriculture during the Industrial Revolution of the mid-nineteenth century. Before this period of time, American farmers grew varied and diverse crops, but with the advent of the Industrial Revolution and its associated mass distribution of products, farmers began to specialize in the crops they raised. The architecture of their barns also became specialized, with led to larger barns like this one with innovative framing to allow for longer and longer clear spans and open areas. The timbers were hewn by hand with the broad axe and adze from massive virgin hemlock trees. They were then joined together using the ancient method of mortise and tenon joinery. This barn’s unique and innovative truss system allowed for forty-foot-long clear spans under which the Reese Brothers could store enormous amounts of loose hay. A copy of an etching of the Reese Barn in Florida, NY is shown here. Note the barn has cupolas in the etchings which was typical at the time. Otherwise the barn looks very similar to the reconstructed barn at the 10xXx Ranch.

The barn is an “English” design which emphasizes few internal columns but long trusses (which allowed a large open area). The barn trusses also have steel tension rods to keep the trusses acting as huge but lightweight beams. In 2000 the Reese barn was carefully dismantled from its original setting in New York and then moved and restored at the 10xXx Ranch to its original condition. The barn represents one of the finest examples of 19th-century rural American architecture, now preserved for future generations to appreciate and enjoy. The 1850 English barn is located next to the Hill Creek house and near the bubbling and sometimes roaring Hill Creek. 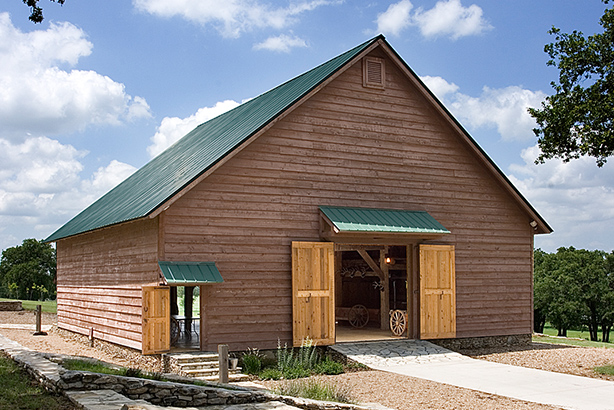 This barn is an excellent example of a New World Dutch Barn. The barn was originally built in 1760 and moved from New York (stick by stick) and rebuilt by the 10xXx Ranch in 2006. The design of these unique barns originated in Holland in the 11th century and was later brought to the New World in the 1600’s by the Dutch settlers to New Netherlands which later became the colony of New York. It was here in America that the Dutch barns reached their grandest dimensions, because unlike in Europe, massive timbers were available from the virgin forests. New World Dutch barns are now considered the finest barns ever built. This barn has witnessed much of American history, including the American Revolution in which over eight hundred homes and barns were burned in the vicinity of the original location of the barn by British raids during October 1780. These raids were called the “Barn Wars”. This barn was originally located less than one mile from the Erie Canal in the Mohawk Valley in upstate New York. The massive overhead beams (with rounded tenons called anchor beams) are unique to Dutch barns and are the largest beams found in any type of barn, often weighing over one ton.

The Dutch farmers of the 1700’s practiced an agriculture in which, unlike modern monoculture that specializes in growing one crop, they raised a wide diversity of plants and livestock. These barns typically held milk cows, oxen, horses, sheep, and chickens. In them the entire winter supply of grains: barley, wheat, rye, oats and corn, aside from large quantities of hay and straw, found safe storage.

The large, open central area of the barn is called the “nave,” from the latin word for “ship.” You can see the reasons for this if you look overhead at the roof interior, which resembles the ribs and planking of the inside of a wooden ship, thus from the word “nave” we derive the word “navey.” 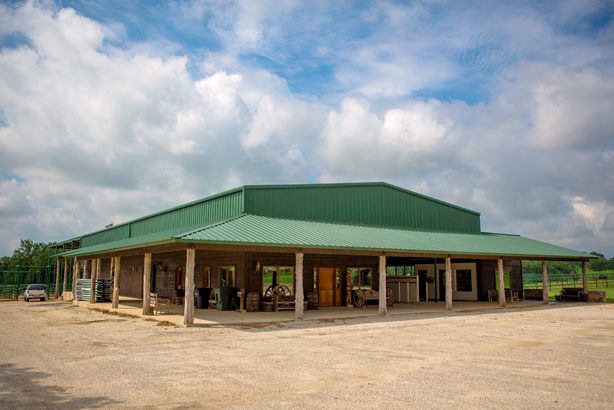 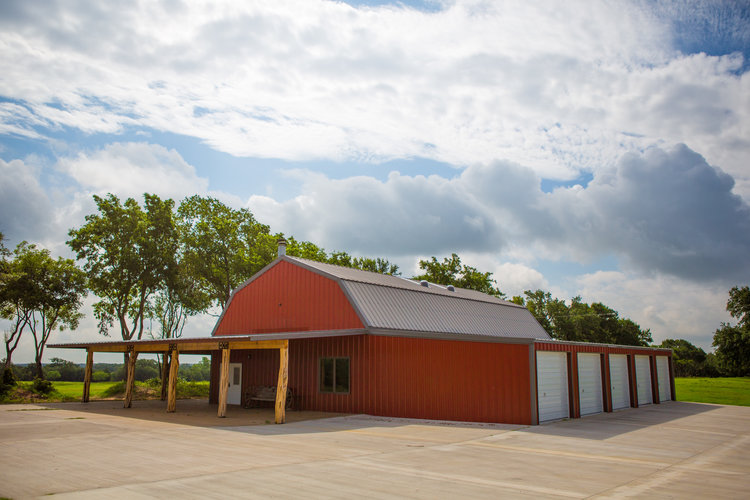 The Red Stag Barn houses many guests and serves as the primary place to hang out for events. 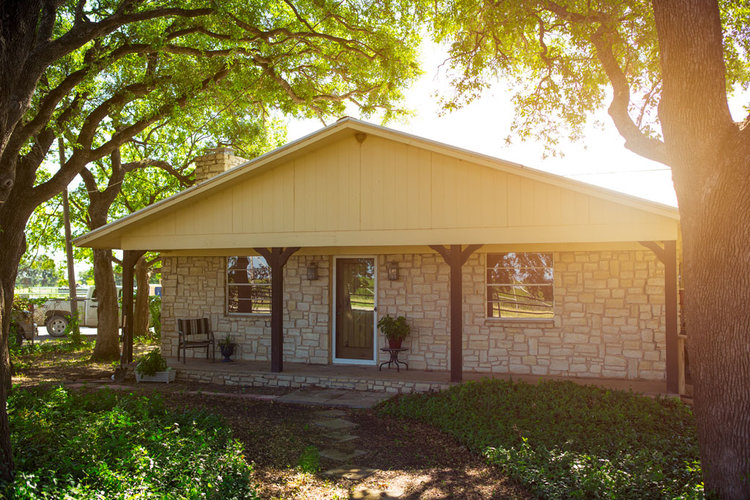 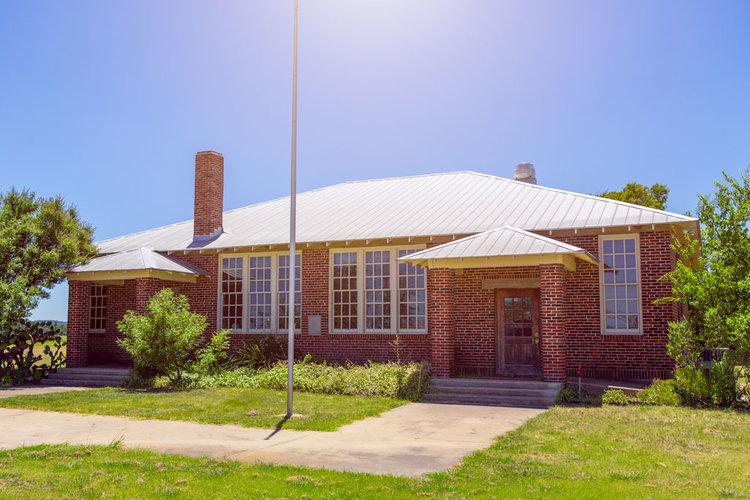 The old town of Eulogy of Bosque county is now a ghost town with a very storied past. During prohibition (1920-1933), Eulogy was in its’ heyday. The town reportedly was a haven for speakeasies, moonshiners, bootlegging, and prostitution. Eulogy’s remote location within the county, combined with rugged tree lined roads and live water creeks provided the perfect brewing location and cover for the private stills needed to manufacture and store the illegal “white lightning”. The Old Eulogy Schoolhouse is now the only remaining building of this notorious bygone era. The Eulogy School was built in 1931 and abandoned about 1937. Prior to this 1931 brick schoolhouse, Eulogy had a two story wooden schoolhouse as depicted in old photos of the town. After the wooden schoolhouse burned in 1930, this two room brick school was built. 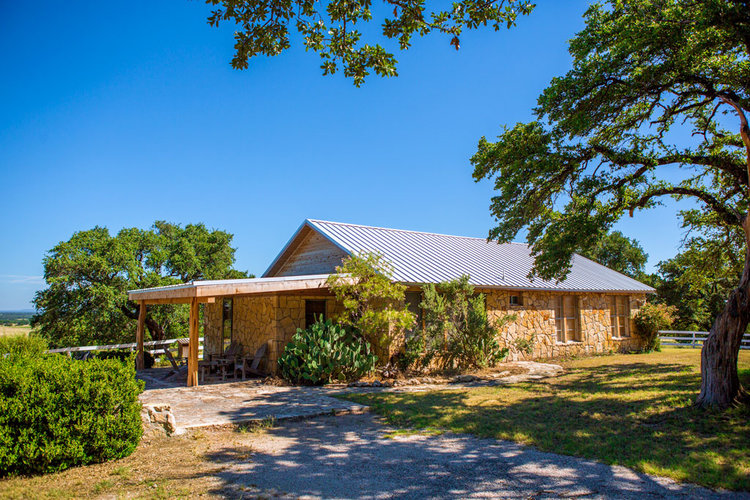 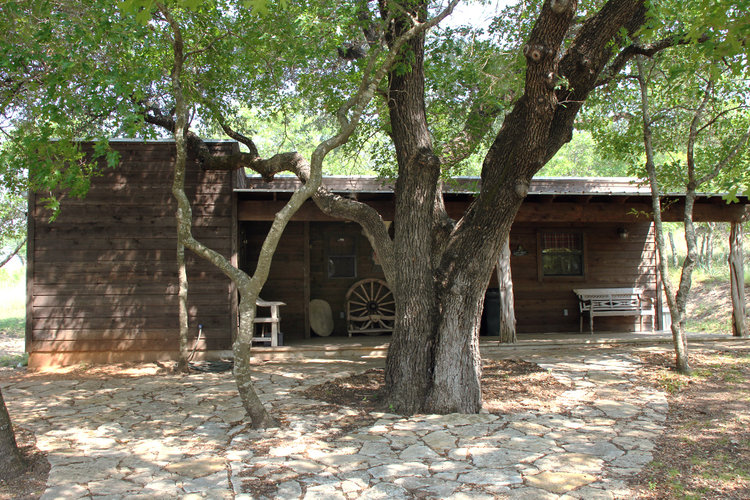 The Hole-in-the-Wall Cabin is located on CoJo Lake (named after Connie and Joe) and is a classic “cabin on the lake.” The cabin has two bedrooms and sleeps eight with two bathrooms (one for each bedroom). The tree covered cabin is within 20 yards of a fishing dock and there is a stone fire pit right in front of the cabin for those interesting late night reasonings with family and friends. 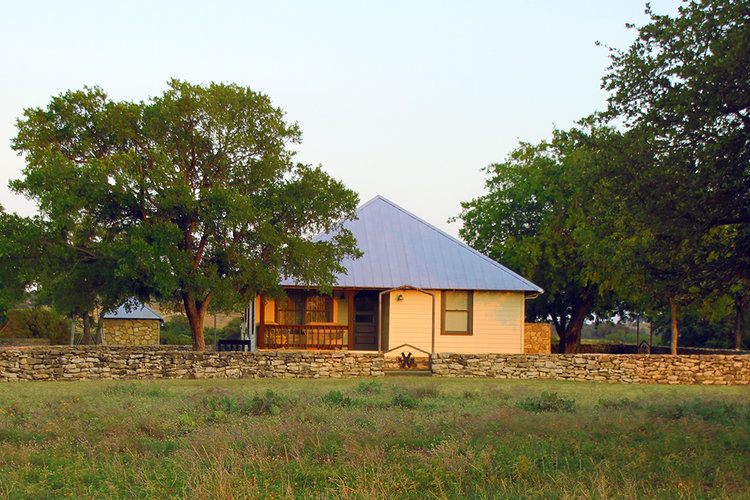 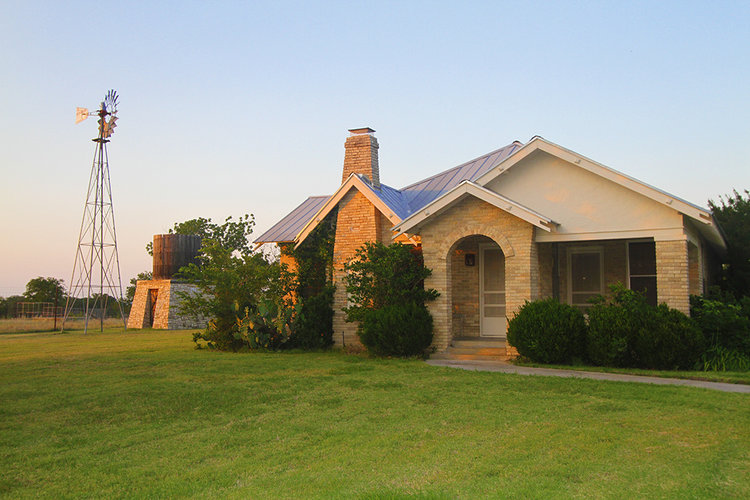 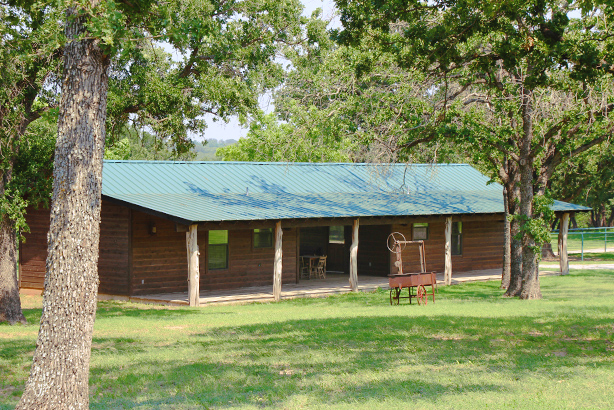 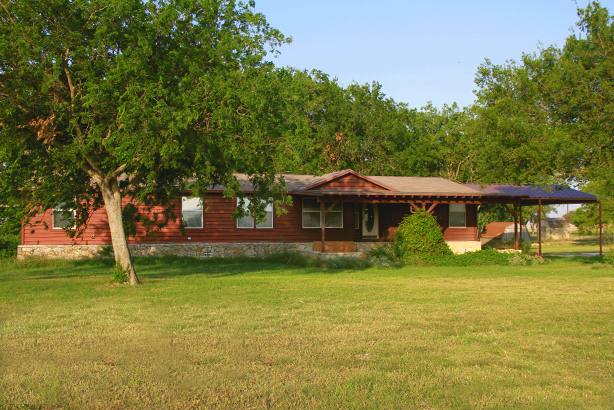 The Eulogy house is a guest house located in the old town of Eulogy. The house has four bedrooms and sleeps up to eight people. 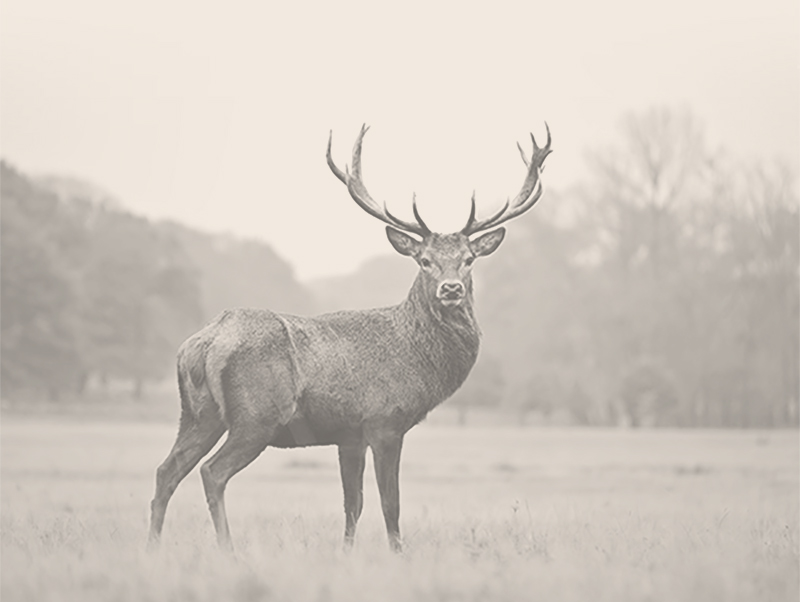